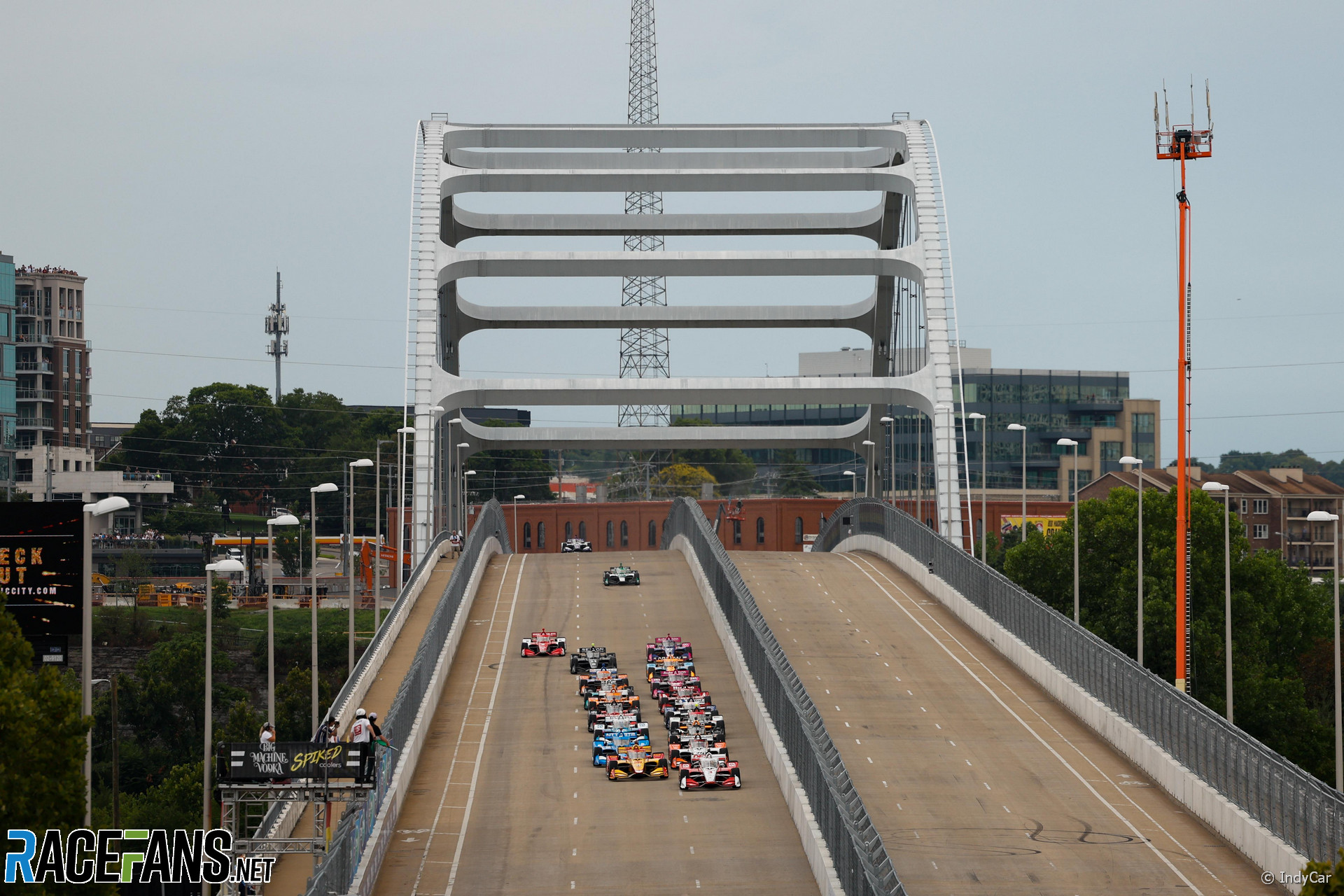 Oh, Nashville. Even after modifications to the downtown street circuit, even with a year of experience baked into the cache of teams and most drivers, the 2022 IndyCar Music City Grand Prix was as much of a carnage-riddled mess as the inaugural edition.

From the feedback to our report of this race, it seems many people have made up their mind about IndyCar’s newest street circuit in one of the fastest-growing cities in the United States. “Crash-fest” was one descriptor. “Farce” was another, along with “garbage”.

Some already came to this conclusion after the first incident-packed IndyCar race a year ago, but after the year-two repeat, this sentiment has grown louder and impossible to ignore. Nashville has a three-year contract with IndyCar that ends in 2023, but does it have a future beyond that? Will it even make it that far?

It’s impossible to ignore a pattern over two years where over 40 percent of the race distances have been run under the safety car, and both races have been red-flagged due to accidents in the final five laps. Over the first and second Music City grands prix produced a combined 17 caution periods covering 69 out of a possible 160 racing laps (over 43%).

That’s the most for any two races at a street circuit since the ill-fated 2013 Houston Grand Prix doubleheader, which had 16 cautions over 53 out of 180 laps. The last of those cautions in race two, of course, was for the multi-car accident which left Dario Franchitti with injuries which led to his retirement. Thankfully, neither of Nashville’s race produced a serious injury, including in the supporting races.

Nashville’s reputation for carnage is said to be a product of the circuit. The southbound run across the Korean War Veterans’ Memorial Bridge leads into a heavy braking zone and potential passing opportunity into turn four, which then feeds into a single-file choke point through turn seven. This was a part of the course which was begging for a track-blocking incident, like the seven-car pile-up that happened on lap 26 of Sunday.

Scott Dixon – who survived the turn seven melee on Sunday to win – said changes made to address the circuit’s biggest trouble spots after the first race were a net positive. “The adjustments that they did this year, especially the transitions on and off the bridge, were huge,” said the six-time IndyCar champion. “I think they did a very good job on opening the sight line in a lot of places. Especially turn 11 and even turn two and turn three.”

Dixon also hinted at changes that could be in the works if the race sticks around long enough to see construction of a luxury apartment building along Peabody Street completed. “I think some changes will come in the future, for that four-through-eight section once that construction is done. They’re talking about, maybe we’ll go up another block and then take a left, which would be great for a passing zone as well.”

Álex Palou, third on Sunday, feels the addition of faster corners would discourage several of the low-percentage manoeuvres seen in these first two years. “I think there are so many corners that it’s so easy to just dive in – because they are so slow, the driver in front has to slow down the car so much, and you need to leave the gap on the inside. If there are some drivers that just go for it, you cannot do anything,” said the reigning IndyCar champion.

When the field wasn’t under the control of IndyCar veteran turned pace car driver Oriol Servia, the racing product at Nashville was otherwise solid. A bit processional, sure, but not out of the ordinary when compared to other, longer-serving IndyCar street races at Long Beach, Toronto, and St. Petersburg. It was difficult, but still possible to make on-track overtakes without causing a crash.

This was even after recurring rain and lightning storms throughout the weekend made it impossible for rubber to build up on the racing line – along with disrupting the weekend schedule, and delaying the green flag by 90 minutes on Sunday.

IndyCar has a race in a growing major American city that is attractive to tourists from around the world, and while “racing over a bridge” may feel like a played-out gimmick for the event’s detractors, the Music City Grand Prix, for better or worse, offers something unique on the IndyCar calendar. It is more inspired than what the Detroit Grand Prix’s new Renaissance Centre layout appears to offer at first glance for 2023 and beyond.

But even if there are quality of life improvements in the pipeline, it’s hard to see a future beyond next year for this event.

Attendance figures for the 2022 Music City Grand Prix haven’t been announced, but it’s generally accepted that the inaugural event drew 110,000 spectators across three days of racing. Maintaining big crowds for a new or returning IndyCar race is hard.

That much is reflected in the number of street races that have come and gone within just a handful of years. The Baltimore Grand Prix got exactly three years before it folded. To say nothing of a proposed race in Boston that never materialised.

If the shots of visibly less-populated grandstands are reflected in the 2022 attendance figures, that does not bode well for the chances of Nashville being extended beyond 2023. The unhelpful weather played its part, sure, delaying the starts of both qualifying and the race. But the combination of the first-year novelty factor wearing off, and a growing reputation of being a sub-par event for pure racing, cannot be ignored as potential factors in a dip in attendance.

This is before even considering the issues last year where spectators paid for tickets in grandstands that had yet to be completed when the weekend started last year, or the inadequate facilities that were on offer to the media covering the event on location this weekend.

As it stands, there will be at least one more Music City Grand Prix next year. Beyond that, the trend is not looking good for the race to stay around long-term. Given its obvious shortcomings as a racing circuit, it seems few would lament its passing.

Motorsport has been a lifelong interest for RJ, both virtual and ‘in the carbon’, since childhood. RJ picked up motorsports writing as a hobby...
Read more about RJ O'Connell, find all their articles and get in touch with them